Hudson-Mohawk Volunteer Firefighters Association
Hudson-Mohawk Volunteer Firefighters Association
HomeAbout UsApparatusCONGRATULATIONS !!Contact UsDeparted Friends of HMVFADeparted Members 2017-22ERGEvents CalendarEvents of HMVFAFilesFire GlossaryFire NewsGuestbookHMVFALA GoalsJournalLadies Aux. DepartedLadies Auxiliary MeetingsLadies Auxiliary OfficersLinksMembersMembership ApplicationNewsNewslettersPicturesStoreThe FallenVideo
Fire glossary
Click a letter to view all entries that begin with that letter.
A B C D E F G H I J K L M N O P Q R S T U V W X Y Z
1 of 1
13 entries in the Fire glossary beginning with "M"
Mass casualty incident (MCI)
Any incident that produces a large number of injured persons requiring emergency medical treatment and transportation to a medical facility. The exact number of patients that makes an incident mass casualty" is defined by departmental procedures and may vary from area to area.
Master box
An alarm system in which a local fire-alarm system triggers a fire alarm box (the master box) to signal the fire condition to a central monitor.
Master stream
A large nozzle, either portable or fixed to a pumper, capable of throwing large amounts of water relatively long distances.
Mattydale
A volunteer fire department, located north of Syracuse, NY, credited with the invention of the Mattydale Lay. The Mattydale Lay is often simply referred to as a "Mattydale" or (now) a "Cross Lay". The engine on which the Mattydale was invented and installed is currently on display at the FASNY museum
Mattydale Lay (Mattydale Load)
The concept of storing preconnected Attack Lines on an engine, as well as storing them such that they are presented at the sides of the apparatus instead of the rear. Commonly called a Cross Lay, the technique allows for rapid deployment of attack lines from either side of the apparatus.
McLeod
Hand tool used in fireline construction, consisting of a combination rake and hoe.
Means of egress
The way out of a building during an emergency; may be by door, window, hallway, or exterior fire escape; local fire codes will often dictate the size. location and type according to the number of occupants and the type of occupancy.
Medium-diameter hose
A hose with diameter between 2 1/2 and 4 inches.
Mop-up
Extinguishing or removing burning material near control lines, felling snags, and trenching logs to prevent rolling after an area has burned, to make a fire safe, or to reduce residual smoke.
Multigas detector
Measuring device designed to indicate concentrations of four selected gases, such as oxygen, carbon monoxide, volatile organic compounds, hydrogen cyanide, etc.
Multiple alarms
A request by an incident commander for additional personnel and apparatus. Each department will vary on the number of apparatus and personnel on each additional alarm.
Mutual aid
An agreement between nearby fire companies to assist each other during emergencies by responding with available manpower and apparatus.
Mutual aid
Cross-jurisdictional assistance with emergency services by pre-arranged agreement.
1 of 1
13 entries in the Fire glossary beginning with "M"
County/Fund Raisers

Calling All Members of the Hudson Mohawk Volunteer Firefighters Association!! We need your County/Fire Department information/events that are going on in your area. Information will also be sent to the FASNY Magazine to get more exposure for your Department. Any fund raiser events/passing of members, or anything else you would like to get out to other members will be put on this website!! Help us help you get the word out there for the events your departments are doing!!

On Sunday, October 30, 2022, there will be a Past Presidents dinner at the Pegasus Restaurant at 10885 Route 9W, Coxsackie, NY starting at 1:00 pm. This year we honor Past President Butch Recchia and Ladies Auxiliary Past President Wendy Van Beusichem. Reservations can me made through the 1st VP Barbara Fischer at 518-461-1703 by October 20th. Dinner will be buffet style at $30 pp with a cash bar. Come join us!

The Ladies Auxiliary to the Hudson Mohawk Volunteer Firefighters Association, will be celebrating their 85th Anniversary on Thursday, October 27 at the West Albany Fire Station on Sand Creek Road in Colonie at 6:00 pm. There will be a meeting followed by a light dinner. Congratulations Ladies!! 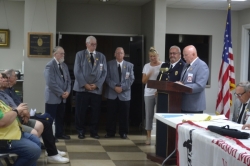