Hudson-Mohawk Volunteer Firefighters Association
Hudson-Mohawk Volunteer Firefighters Association
HomeAbout UsApparatusCONGRATULATIONS !!Contact UsDeparted Friends of HMVFADeparted Members 2017-22ERGEvents CalendarEvents of HMVFAFilesFire GlossaryFire NewsGuestbookHMVFALA GoalsJournalLadies Aux. DepartedLadies Auxiliary MeetingsLadies Auxiliary OfficersLinksMembersMembership ApplicationNewsNewslettersPicturesStoreThe FallenVideo
Fire glossary
Click a letter to view all entries that begin with that letter.
A B C D E F G H I J K L M N O P Q R S T U V W X Y Z
1 of 1
13 entries in the Fire glossary beginning with "O"
Occupancy
Zoning and safety code term used to determine how a structure is permitted to be used and occupied, which in turn dictates the necessary safety structures and procedures.
Occupancy class
General categories of structures for purpose of safety planning, such as for hospital, assembly, industrial, single-family dwelling, apartment building, commercial, etc. Further broken down by types of hazards associated with particular occupancies, such as gas stations.
Occupant use hose
Light-weight firehose coupled to standpipe for emergency use by building occupants prior to arrival of firefighters. Often accessible by breaking glass to unlock secure enclosure.
Offensive attack
Method of firefighting in which water or other extinguisher is taken directly to the seat of the fire, as opposed to being pumped in that general direction from a safe distance.
On-call
Personnel who can be summoned (and paid) when necessary to respond to an incident; a type of volunteer" fire department.
One-hour fuel
Vegetation with large surface-to-mass ratio, a so-called fine fuel" (along with 10-hour) that quickly reaches critical (inflammable) moisture levels (fine fuel moisture FFM) when exposed to heat; compare with 100-hour or 1000-hour fuels (i.e. live fuel moisture LFM) which take much more heat to ignite.
Open-circuit SCBA
See SCBA. Exhaled air is not reused by the system.
OSHA
U.S. government agency concerned with regulating employee safety, particularly in hazardous occupations such as firefighting.
Outside fire
Urban fire not inside a building or vehicle, often found to be burning trash which could extend to nearby structures or vehicles if not dealt with properly. A suburban, interface, or rural outside fire could also be a wildland fire.
Outside stem and yoke valve (OS&Y)
Type of gate valve actuator arranged such that the valve stem moves in and out of the handle, thus externally indicating whether the valve is open or shut, unlike the more common gate valve wherein the stem rotates and only the gate moves up and down inside the fixture.
Overhauling
Late stage in fire-suppression process during which the burned area is carefully examined for remaining sources of heat that may re-kindle the fire. Often coincides with salvage operations to prevent further loss to structure or its contents, as well as fire-cause determination and preservation of evidence.
Overhead
Personnel assigned to supervisory positions, including Incident Commander, Command Staff, General Staff, Branch Directors, Supervisors, Unit Leaders, Managers, and staff.
Oxidizer
A hazardous material containing oxygen that can combine with adjacent fuel to start or feed a fire.
1 of 1
13 entries in the Fire glossary beginning with "O"
County/Fund Raisers

Calling All Members of the Hudson Mohawk Volunteer Firefighters Association!! We need your County/Fire Department information/events that are going on in your area. Information will also be sent to the FASNY Magazine to get more exposure for your Department. Any fund raiser events/passing of members, or anything else you would like to get out to other members will be put on this website!! Help us help you get the word out there for the events your departments are doing!!

On Sunday, October 30, 2022, there will be a Past Presidents dinner at the Pegasus Restaurant at 10885 Route 9W, Coxsackie, NY starting at 1:00 pm. This year we honor Past President Butch Recchia and Ladies Auxiliary Past President Wendy Van Beusichem. Reservations can me made through the 1st VP Barbara Fischer at 518-461-1703 by October 20th. Dinner will be buffet style at $30 pp with a cash bar. Come join us!

The Ladies Auxiliary to the Hudson Mohawk Volunteer Firefighters Association, will be celebrating their 85th Anniversary on Thursday, October 27 at the West Albany Fire Station on Sand Creek Road in Colonie at 6:00 pm. There will be a meeting followed by a light dinner. Congratulations Ladies!! 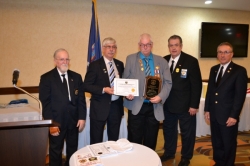